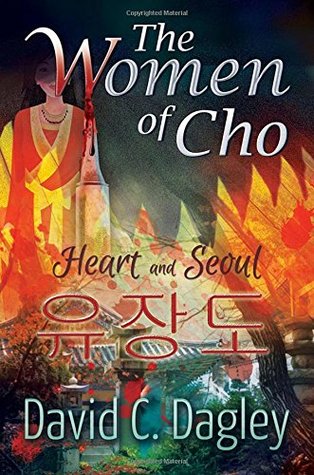 Did you know that this book was the sequel to Cale Dixon and the Moguk Murders? Of course not. Once again, Strategic Book Publishing and Rights Co. (SBPRA) has put out another sub par book that has numerous mistakes that should have been caught by a legitimate publisher. Almost all of the same qualms I had with Cale Dixon and the Moguk Murders are back, but now there’s a host of new problems. From the unreadable cover containing a collection of fonts and almost random images to the constant peppering of basic homophone errors in the text itself, The Women of Cho: Heart and Seoul is merely a cash-grab by a publishing company that does nothing but release unpolished manuscripts.

I actually started reading this book before its predecessor, mainly because the individual who contacted me from SBPRA said that it had little connection to Cale Dixon and the Moguk Murders. That was a lie. Almost immediately, I found myself wondering why events and characters were referenced without any context to the situation at hand. Most thrillers can get away with each book in the “series” being an independent entity. Not so in the Cale Dixon series, as so many questions were left unanswered in The Moguk Murders as to need a sequel. If the publisher were smart, they would have made both books look the same and have similar naming structures to indicate that they were connected at all. This book should have been titled Cale Dixon and the Women of Cho, if for no other reason than to get rid of that awful pun that had little to no bearing on the plot (other than the setting).

If I were editing these two books, I would have actually cut Cale Dixon out of both entirely, and let the South Koreans fight it out for these family heirlooms since that part of the books (albeit a minor part) was actually somewhat interesting. Instead, we are once again forced to watch Dixon’s misogyny as he “gets it on” with his boss, which just adds to me questioning why he wasn’t straight up fired from the police force years ago. Not that the new focus of the book, Monica, is any better. Her idiocy was not being a lot more paranoid after learning all the surveillance she was under. Instead, she just casually goes for strolls through the streets of South Korea without a clue in the world. And while the “pacing” was a little better in this book, with no chapters taking up huge chunks of the book (most were only a paragraph to a page in length), the continuity of all the different characters introduced and followed was certainly lacking.

While it is clear we will see Cale Dixon in the third installment in this series, I know I will not read it. I am surprised I even made it all the way through two books since I was practically yelling at the stupidity of it all by the end of this one. Both books put so much of their action and meaningful answers in the last few chapters that I wondered why the rest of the book even existed at all. As I said in the review of the previous book in this “series,” I hope the author of these books did not pay SBPRA anything for his works because he got cheated. Sure, they might help with “distribution,” but I know I wouldn’t want my name on a book like this.

Another failure of SBPRA to release a readable book, I give The Women of Cho: Heart and Seoul 1.0 stars out of 5.