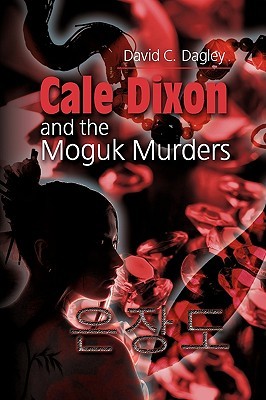 Books like this one are what give independent writers a bad name. Furthermore, books like this should give independent authors pause before becoming contractually tied to a publisher. I found this book (and its “sequel”) to be so bad that I looked into the publisher a little bit. It turns out, Strategic Book Publishing and Rights Co. (SBPRA) (also known as Author Marketing Ideas (AMI)) is a big-time scam, and I hope any authors who are reading this review will keep as far away from them as possible. If a reputable publisher released this book, it wouldn’t have been nearly as unpolished as this book is. While I’m sure the author thought his story was terrific, I hope he asks for his money back.

Part of the role of a publisher, aside from distribution, is to get a book ready for a broad audience. With Cale Dixon and the Moguk Murders, I’ll show how SBPRA should have presented this book, by highlighting the things they did not do for the author. Let’s start at the beginning: the cover. Comprised of a hodgepodge of stock photos and basic word processor fonts, this cover doesn’t grab my attention and instead is hard to look at. Furthermore, if this book were a thriller, it would have been titled The Moguk Murders, since most thriller protagonists don’t show up in the title (i.e., Hard Road, The Tracker, etc.). A professional cover artist and editor would have caught these things before the book was published.

Next, let’s look at what an editor for a publisher should have found in the manuscript itself. It seems to me that whoever edited this book only used spell check, without looking at any context. There are so many homophone and proofreading errors that it was difficult to read, at times pulling me out of the story so hard I almost got whiplash. An editor would have also recognized how much information was redundant or repetitive in the narrative, with nearly every mention of the case to a new character requiring a full recap of everything that had happened up to that point. This editor would have also fixed the pacing issue since most chapters were only a couple pages long, but other chapters comprised up to 10% of the entire book.

Finally, an editor from a publisher would have worked to make the story less cringe-worthy. None of the characters made any sense in their actions, and most were guilty of egregious errors in judgment and protocol. The titular character was probably the worst of them all, exhibiting all the eye-rolling misogyny that seems more forced than natural. The amount of leniency he is given from the police department of San Francisco is criminal. From discussing open murder cases in front of tour groups to withholding evidence and taking said evidence overseas to illegal and black market individuals, the fact that the Police Chief even let him come back on the force from his “suspension” broke every fiber of my suspension of disbelief. By the end of the story, I hated all these idiotic characters, almost as much as I hated the “tag along” chapter that induced a sequel. That being said, a sequel was almost necessary, since there were no answers to any of the questions brought up in this book.

An example of a bad publisher releasing an unfinished work, I give Cale Dixon and the Moguk Murders 1.0 stars out of 5.