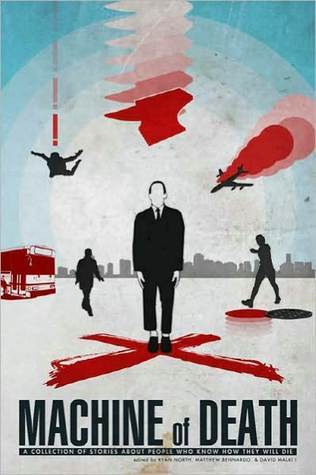 The concept is simple: a machine takes your blood and spits out a card with the means of your demise printed on it. In this collection of short stories, a variety of authors explore what this truly means for individuals, as well as society as a whole. Based off an idea by Ryan North (author of “Dinosaur Comics”), this anthology has plenty of different approaches to the concept that a machine could predict how a person will die. However, many of these ideas hit upon the same concepts and social implications, making the whole thought exercise seem redundant by the end of the book.

Part of me felt the idea itself was a little derivative of Death Note, but with a more ambiguous set of constraints. Each of the short stories included in this anthology had some unique twist on the idea, ranging from humor to romance to horror. Still, every author tended to agree: a machine of death would bring about a dystopian future in some form or other. From governments requiring a “death reading” to mitigate any national disasters to a school needing to know how their prospective students will die so they can save face, the real enemies of this idea tended to be the bureaucracies of humanity.

While I honestly enjoyed the stories included in this anthology, they all seemed to suffer from the “a priori problem.” With each story titled with some way to die, you half-expect the story’s main character to end via that method. The intrigue is more in the how and when; thus providing interest to the story despite practically knowing the ending before it even starts. Granted, that’s part of the appeal of the machine: the ambiguity is as freeing as it is constraining.

A morbid set of interesting short stories, I give Machine of Death 4.0 stars out of 5.