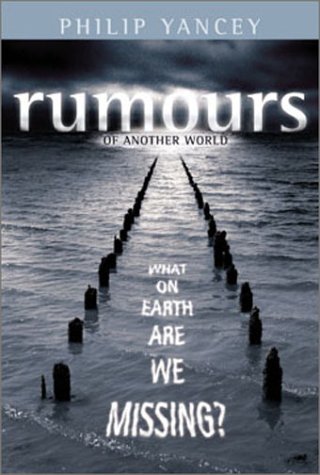 Having been a Christian for some time, I was familiar with the name Philip Yancey. I knew he often wrote books about Christianity and how those of us in the faith should examine some of the more challenging topics of our belief. When I picked up Rumors of Another World from a friend, I was expecting an examination of the afterlife promised us in God’s Word. Part of me was planning to use this book as a bit of research for my own fictional writing, or at least to give me ideas on how to incorporate a heavenly realm into it. In the end, this book was not what I expected.

It has been a long time since I’ve read any Yancey, but I don’t think this is his strongest work. My primary issue with it is that it tries to speak to too many audiences. If it either focused on trying to convince atheists and other scientific-minded individuals that there is a heaven and a hell or helping believers enforce their apologetics on the topic of the afterlife, it could have worked. Instead, it (almost ironically) sits in the middle of these two worlds, never diving deep enough to make a solid point about anything.

Furthermore, while I appreciated the anecdotes and quotes from other authors, many of them were reused throughout the book, making the whole narrative seem repetitive and redundant. I mean, I get it: C.S. Lewis is an excellent writer with a ton of great quotes, but there are other Christian authors out there as well. In the end, Rumours of Another World provides a few thinking points for Christians and non-Christians alike, but it never really challenges our deeply held beliefs or leads us into startling, life-changing revelations.

An OK book that breaks down some reductionist arguments, I give Rumors of Another World 2.5 stars out of 5.