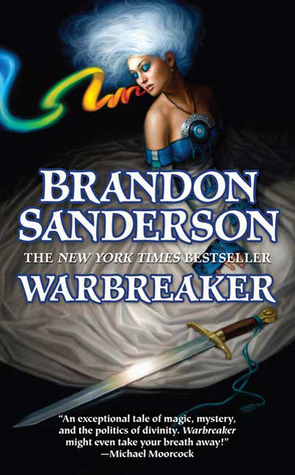 For the last few years, Brandon Sanderson’s name kept coming up amongst my writer friends. I had never heard of him, but they had been fans of his writing for some time. In my goal to read all the unread books I own, I found that I had obtained a Brandon Sanderson book many years ago as a prize during my first National Novel Writing Month. Even with the daunting page count, I decided to give Warbreaker a read. All I can say is that it was refreshing to finally read a fantasy book written by someone who genuinely knows what they’re doing.

I’ve read a lot of books recently that I would consider “amateur,” but Sanderson proves he’s a professional in this tightly written book. From incredibly interesting and entertaining characters to expertly placed foreshadowing to a fascinating magic system, Warbreaker is fully original while also maintaining the tropes and structure of a high fantasy novel. The twists in the plot continued to grab my attention as the mystery surrounding these characters unfolded. As I read, I had a few qualms with minor points in the story, but Sanderson managed to quash these negative points by the end of the book.

I have stayed away from the fantasy genre for a long time because I know how lengthy some of these book series can be, and I didn’t want to become invested in something that might not even reach its penultimate conclusion. Fortunately, Warbreaker is well-encapsulated in its own, standalone story. Sure, there are hints at what the future may hold for some of these characters, but nothing was particularly pressing or “cliffhanger-ish” in this book. Either way, consider me a believer in the fantasy genre, and in Sanderson particularly. Maybe now it’s time I started to dive into his other works.

An original and highly entertaining fantasy story, I give Warbreaker 5.0 stars out of 5.