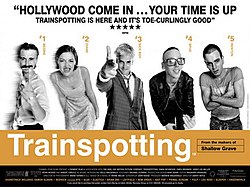 As someone who has never done drugs, I have no way to know what the experience of being high on heroin or cocaine is like. Fortunately, I don’t have to do these drugs to get an understanding of the sensation. In the early years of film, most movies about drugs were usually cautionary tales (as was the case for Reefer Madness (1936)). By the “free-loving” decades of the 1960’s and 1970’s, drugs were more acceptable but often were seen in a comedic context (a la “Cheech & Chong”).

The societal excess of the 1980’s and 1990’s beget an epedemic of harder drugs like heroin and cocaine. Consequently, we started to see more films that would glamorize drug use, but would still show the consequences of extended use of these harder drugs. Perhaps the most famous film that fits in this category is the hard-to-watch Requiem for a Dream (2000), which really played up the “consequences” part. A few years before this film, though, was Trainspotting (1996).

While Trainspotting was less intense than Requiem for a Dream, they both had stunning visuals to help the audience understand the drug experience. Sure, there are similarly horrifying elements of Trainspotting, including the worst toilet in Scotland and a ceiling-crawling baby, but they are mostly cancelled out by the more “fun” sequences. At the very least, Trainspotting seems to succeed via its main protagonist Mark Renton (Ewan McGregor, in an early role) putting forth the effort to get clean instead of always succumbing to his heroin addiction. That’s not to say the film doesn’t glamorize these drugs by adding in the counterpoints of sex and rock and roll, but at least there’s an effort to have a bit of a moral at the end.

An entertaining look into the experiences of drug addicts, I give Trainspotting 4.0 stars out of 5.