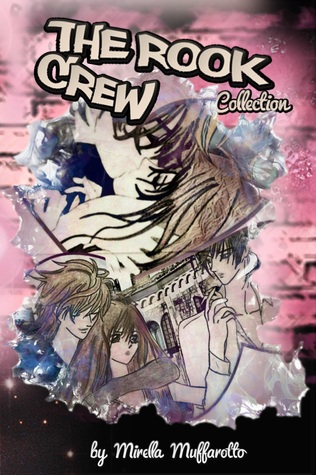 Usually, when I enter a Goodreads Giveaway, I have an expectation for what the book is about via the title and the cover. With The Rook Crew, my expectations were way off. With the cover, I was expecting a shoujo (a Japanese term signifying an audience comprised of female teenagers) light novel. I didn’t know what to think about the title, but I honestly can’t say it has anything to do with this book. “The Rook Café” is a location in this book that’s visited maybe a half-dozen times, with no indication of why it’s significant or unique. Likewise, the “crew” that visits The Rook Café regularly was never fleshed out beyond the main characters and one or two minor ones. If it were me, I’d title the book something like Soccer Sweetheart, which would accurately convey the sports/romance aspects of the book.

I will admit that the pacing is pretty good (albeit heavily weighted toward either one of the characters at a single time) and the style is easy to read. There were also a few, well-described and realistic situations, including a cyber-bullying incident. However, I would have appreciated more “scene breaks” in each chapter, as everything just kind of blended together with no clear demarcation. In fact, as this book was two books combined, I couldn’t honestly tell you where that break between the two books occurred. And while the occasional proofreading or formatting error wasn’t too distracting, the author’s “narrator” became a bit difficult to read, especially when it was contradicting what the characters were saying or when it was breaking the fourth wall.

While the book is classified as Young Adult (YA), I seriously question this as there was quite a bit too much hard swearing and sexuality to be in a book that should be marketed toward, well, young adults. If anything, this book sits on the edge between Young Adult and New Adult for these same reasons. Unfortunately, because it is classified as YA, it follows all of the clichés of the genre, even to the point of having an ending that realistically shouldn’t have happened. Maybe it’s because I’m not in the core demographic, but I cringe at reading characters who obsess over shows from The CW, are in Emo bands who have one original song and twenty covers, and can’t get enough of the Twilight saga. In the end, I felt the characters were mostly flat, especially the women. While the two male “love interests” had passions that defined them (like soccer or music), the female protagonist’s only defining feature was that she had an irrational love for the soccer player. Her focus could have been on reading or dancing, or anything else, but all she ever talked about was her attraction to Matteo. These privileged characters rarely made any sense and caused me to roll my eyes more often than not.

A standard YA book with all its clichés and foibles, I give The Rook Crew 3.0 stars out of 5.