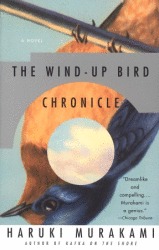 A coworker of mine suggested this book to me a few months back. The title sounded interesting, so I put it on my Overdrive wish list and waited for it to become available. Both he and I have a somewhat thorough understanding of Japanese culture, so once I got into this book, I found myself imagining it as an anime. Of course, because The Wind-up Bird Chronicle was originally written in Japanese, there are plenty of cultural idiosyncrasies that might be hard to understand from a different cultural viewpoint. At times, the content is a bit weird, the sex awkward, and the violence strangely surgical.

What was quite refreshing with the narrative in The Wind-up Bird Chronicle, was its timelessness. Written in the early 1990’s and set in the mid-1980’s, only a few technological items (i.e. a land line, an early computer, etc.) haven’t held up well over time. Everything else about the story is so character-driven that it could probably happen at any time. These characters are odd, to say the least. From psychic sisters named after Mediterranean islands to a wealthy perfectionist mother and her mute son, many of their sub-plots do end up tying together in the not-so-surprising ending.

As a “chronicle,” the book does feel episodic at times, hence why I imagined it as an anime. Because I have seen a lot of anime, the content of this book didn’t surprise me. There’s some weird stuff out there, and Japan seems to create quite a bit of it. While the sex and violence might be off-putting to some, it’s not necessarily erotic or graphic in its presentation; it is merely a fact of life. A strange life, to say the least, but a life nonetheless. Parts “slice of life,” “harem,” and “psychological thriller,” in terms of genre, The Wind-up Bird Chronicle is an excellent book for anyone already accustomed to Japanese storytelling.

A prime example of an almost “standard” Japanese plot, I give The Wind-up Bird Chronicle 3.5 stars out of 5.