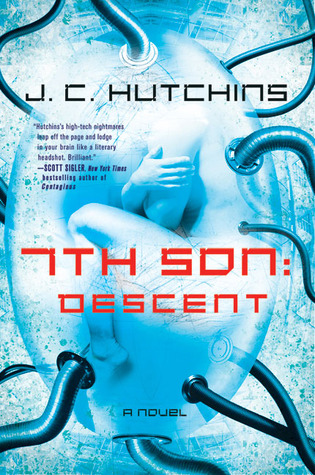 I managed to find this book on a table full of free books at a convention some time ago and tucked it away in my “to read” pile. Now that I’ve finished most of the Goodreads giveaways I have received, I decided to give it a read. With nothing other than the title (which doesn’t tell me much) and the cover (which gives a little more information), I honestly didn’t know what to expect from this book. Since it was on a table of free books, I didn’t have much expectation for it, but boy did it ever deliver!

With a fantastically engaging idea and a blisteringly fast execution, 7th Son: Descent pulled me in from the get-go and wouldn’t let go. Action! Espionage! Science! Without ever becoming too mired in the details (but providing enough to have the plot make sense), this book successfully made a story about cloning that wasn’t trite or cliché. The ideas and characters contained within were unquestionably too big for this book since it introduced many subplots but never concluded them. Still, there was enough of a conclusion to this book to leave me satisfied without it being too much of a cliffhanger.

My one qualm with 7th Son: Descent, other than the brief, horrifying moment of implied violence involving a pneumatic socket wrench, was that there were almost too many characters. I understand that there needed to be a well-rounded group of clones, but I honestly couldn’t tell you anything significant or memorable about at least two of them. I mean, you have the free-spirited musician, the conspiracy-nut hacker, the gay marine, the priest, and the egomaniac criminal psychologist, but I guess the U.N. employee and the other guy (I can’t even remember what he did) didn’t stand out to me. Maybe they play a bigger role in the later books, but they seemed undeveloped in this one.

An excellent, action-packed science fiction book that left me wanting more, I give 7th Son: Descent 4.5 stars out of 5.