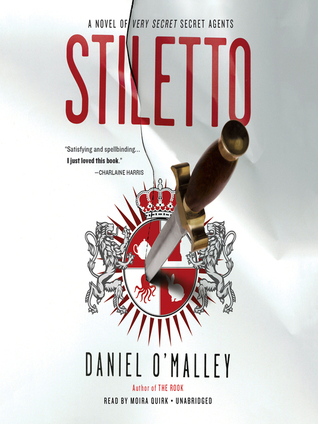 I’ll be the first to admit that I like sequels. Or, more accurately, well-done sequels. While the first book in a series can be great by itself, it carries the burden of exposition and world-building. A good sequel gives a light refresher of the important points and gets right into the action. I would certainly consider Stiletto to be a well-done sequel to the first book in the Checquy Files series, The Rook. Not only does it expand upon the central conflict in the first book, but it throws in the twist of the warring factions of the Checquy and the Grafters coming together to form a truce.

In making enemies into teammates, Daniel O’Malley shows the differences between them are almost superficial. The chess-based supernatural soldiers of the Checquy almost have the same strength of powers that the genetically and surgically enhanced members of the Grafters do. Since the whole plot usually revolves around a pawn of the Checquy and a young woman from the Grafters as they try and maneuver treaty negotiations, the reader gets to see both sides of the argument. Of course, as was the case in The Rook, much of the story is divided into episodic events with an overarching storyline connecting these loosely-related moments together.

Even if the humor is often bodily-related, the style continues to be quintessentially British. It casts a delicate balance between action and humor while also moving the story along to an exciting conclusion. I would almost think such a series would be perfect for a Television show adaptation since its episodic nature lends itself to be easily broken up into smaller pieces. One last thing I would like to mention is that the narration given by Moria Quirk in this book was outstanding. With many different European accents and a variety of unique characters to voice, Quirk made the story understandable and engaging in all the best ways.

A perfect sequel to one of my new favorite series, I give Stiletto 4.5 stars out of 5.