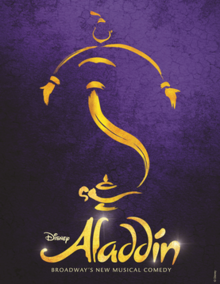 Anyone who knows me will know that Aladdin (1992) is easily one of my top three favorite Disney movies. Not only is the focus of the narrative more on the male lead than the “princess,” but the songs were catchy, and the Genie was hilarious. You can then imagine my surprise to learn that this movie was now a Broadway musical (much in the same way Beauty and the Beast (1991) and The Lion King (1994) before it). Since I was in New York City on vacation, I had to take in a Broadway show and was glad that this was the one I saw.

Knowing that a ~90 minute animated film would need to be padded out to a full, 2-act stage musical, the additions to the plot made sense. Many of the animal companions (if not all of them) were replaced with friends, handmaids, or lackeys in this production. The sub-plot of Aladdin wanting to do right by his recently deceased mother helped to round out his character more from his animated counterpart. Partly because Robin Williams’ Genie was quite incomparable, the choice to make the Genie more of a “black” role was a wise one and added a different spin to the character’s comedy.

While many of the changes to the plot and characters made sense, one aspect of the musical I was somewhat confused by was the adherence to some of the original lyrics, even if the accompanying actions or consequences weren’t there. Either way, the set designs and practical effects used to recreate some of the magic of the original animated film were quite top-notch. I was also pleased to know that the actor portraying Jafar on the stage (Jonathan Freeman) was the same one who voiced him in the animated film. Even if it wasn’t a directly or wholly adapted musical from the animated film, Aladdin was certainly an entertaining show.