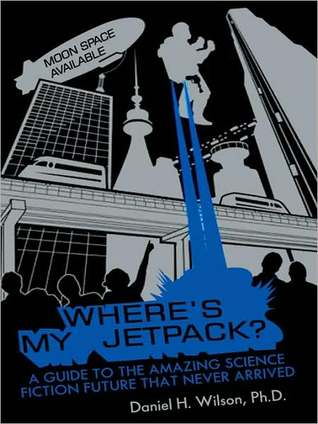 Some of the best science fiction ever written was strangely prescient with its predictions on how the world would advance, technologically. One of the best examples of this was Jules Verne in his story From the Earth to the Moon. Not only did he figure out what it would take to get away from Earth’s gravity, he predicted that the launch site would be in Florida. Ever since then, we have looked to the authors of science fiction to tell us what could be possible in the future of tomorrow.

Unfortunately, some of these predictions weren’t quite realistic. While jetpacks and moon colonies sound cool in the pages of a fictional book, they just aren’t practical in reality. Still, our childlike wonder and innovation tried its best to create what the science fiction authors of yore dreamt up. In Where’s My Jetpack?, Daniel H. Wilson does his best to explain where all these fantastical inventions and concepts are in their process toward being fully realized. But don’t worry about this being a stuffy tome full of complicated science. Wilson does a good job infusing humor with his research, which helps to show how ridiculous some of these ideas really are.

My one challenge with this book came with the fact that it was published back in 2007. It’s been 10 years since this book came out and now much of its research is either naively optimistic or didn’t pan out. What’s perhaps even more exciting is being aware of the technological developments that have made some of the impossibilities mentioned in this book at least somewhat plausible. Consequently, it’s best to read this book as a snapshot in the technological timeline that is our current reality.

A humorous look at the amazing technological developments inspired by sci-fi, I give Where’s My Jetpack? 4.0 stars out of 5.