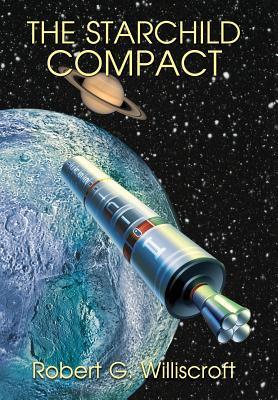 With the popularity of The Martian bringing hard science into the realm of science fiction, there has been a bit of a resurgence of including accurate science in near-term speculative fiction. On the one hand, the book must remain readable to a wide audience, so the science shouldn’t bog down too much of the exposition. On the other hand, if some of the science is not explained, it can leave less scientifically educated readers in the dark about why certain aspects of the plot are the way they are. The Starchild Compact manages to succeed at balancing these two elements while also introducing some strictly non-scientific plot development.

First, let me address the science presented in this book. Knowing enough about general relativity and current space travel technologies, Williscroft certainly knows his stuff. The challenges and hurdles to travel to the gas giants of our solar system, as well as at relativistic speeds, were clearly presented, even if the science was redundantly repeated every time it came up. After a while, I kept thinking to myself, “I get it, move on!” Unfortunately, another aspect of the hard science that I could not ignore was the objectification of women. Almost all of the female characters were shallowly developed, merely being horny, sex-crazed eye candy for the rest of the male crew members. I didn’t even know why they were on board until much later in the plot. In this way, I felt The Starchild Compact was heavily borrowing from the more pulp-like sci-fi of the 1950’s instead of allowing the women to be equal partners in the expedition.

Secondly, the entertainment value of this book was fairly good. Even if the antagonists were unflattering stereotypes, it was satisfying to see justice finally prevail against them (even if it could have happened numerous times during the plot). There were a few slow spots in the plot from time-to-time, but overall it was an interesting read and presented a fascinating “what if” scenario. At the very least, because the science was correct, it could fall into the realm of the plausible (even if it’s a very loose “plausible”).

A hard science fiction story that successfully balances science and plot, I give The Starchild Compact 3.5 stars out of 5.