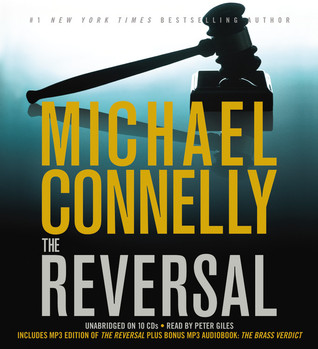 After two novels of Mickey Haller defending guilty scumbags, Michael Connelly changes it up with The Reversal. Not only does the title refer to the reversal of a 24-year old conviction, but also to the main character’s swap over to the prosecution. While there seems to have been a book between this one and The Brass Verdict, I have a feeling it was mostly about Harry Bosch, since the hinted details in this book give me a good idea of what happened and it didn’t change the last reference point of Mickey Haller.

Now that these two main characters were tied together in this case, one of the issues I had with this book was how often it switched between first and third person POVs. Perhaps I was too used to the story being told from Mickey Haller’s perspective and there was so much that happened outside of his direct involvement that it was necessary. However, there were times where Haller was present in the scene and it seemed to switch between the two POVs somewhat inconsistently, adding to my confusion as to who was speaking. I only hope the next book in the series focuses more on Haller than splitting the time between him and Bosch.

Furthermore, while I did appreciate the change of Haller being a part of the prosecution team with his ex-wife, the story unfolded much in the same way the others had. Most of the trial was pretty predictable with the twists being easily recognized well before they were revealed. The unpredictable ending is almost part of the template now, so even though it was an exciting development, I had come to expect it.

Another Michael Connelly standard with a few changes to make it interesting, I give The Reversal 3.5 stars out of 5.