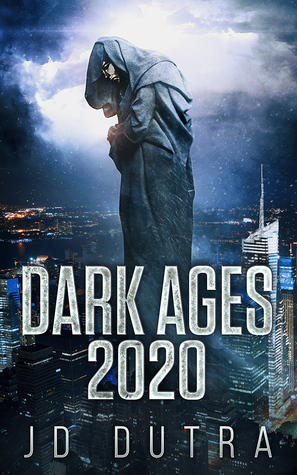 If you like to read to escape from reality, this book is not for you. Practically pulled from today’s headlines, Dark Ages: 2020 takes a look at a potential future that could be mere years away. Of course, in order to do so, there’s a lot of conspiracy theories that would need to come true in order for this novel to be a reality. That being said, the one thing this book does well is to remove any hope you might ever have in humanity. Not only on a local and personal level but as a civilization as a whole.

Unfortunately, none of the characters in this book are likable. They all have flaws and these flaws aren’t just minor character flaws, but full-blown ethical quandaries. The reason for this is that each one of these characters is an extreme stereotype. Honestly, this book almost comes across as incredibly racist because of these characters. The Islamic Terrorist. The Welfare-dependent Black people. The Caucasian cuckolder in jail for white-collar crimes. The successful Asian with ties to the mafia. Look, I get that the current state of the American political system isn’t the best, and I agree that some of these regulations and laws can be quite ridiculous. But is it the author’s job to make his opinion that blatantly obvious?

As it is written, Dark Ages: 2020 is a pretty quick read, even if it is cringe-worthy at times. There are still a number of proofreading errors (like whatever was going on with the quotation marks occasionally changing to the “double angle” style) that pulled me out of the story, which is unfortunate. The plot could probably have also worked without the minimal bit of “alien influence” as well. Overall, this is your standard apocalyptic-to-post-apocalyptic story and there weren’t that many unpredictable elements in it at all.

A book that tells people who watch the news things they probably already know; I give Dark Ages: 2020 3.0 stars out of 5.