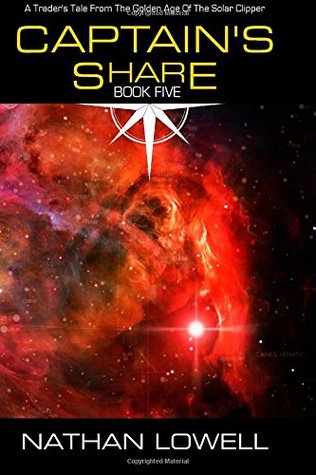 Another book, another jump forward in time. While I do appreciate Lowell’s realism for how long it should take to gain enough experience to even be considered qualified enough to become a ship Captain, a lot can happen in ten years. Ishmael Wang has certainly matured into the role of Captain, even if some of his decision-making in his personal life is left lacking, especially considering how adept he was in Half Share. At least by the end of this book, some things are “back to normal” for him as he continues his meteoric rise through the ranks.

In terms of plot, there was plenty of excitement in this entry of the Golden Age of the Solar Clipper series. Never before have I been so interested in the fate of a simple cargo delivery, let alone the ship that carried it. I haven’t been this attentive to an Estimated Time of Delivery since I ordered a much-desired item from Amazon. And while Captain Wang has his work cut out for him turning around an incompetent crew, at least he doesn’t have to deal with the violent crew from his last ship any longer.

Nathan Lowell continues to impress me with his mastery of the English language and his simplicity in utilizing it to describe situations and conversations that feel very realistic, despite the science fiction context. The words just naturally combine together to create tension, humor, and head-scratching moments wherein you wonder if people this incompetent would ever truly exist. Even though this book is the next logical step in the career of Ishmael Wang, it certainly had a few interesting stories throughout it to keep me engaged as a reader (even if the marriage subplot was a bit cliché and predictable).

Another fantastic voyage out into the deep dark with Ishmael Wang now at the helm, I give Captain’s Share 5.0 stars out of 5.