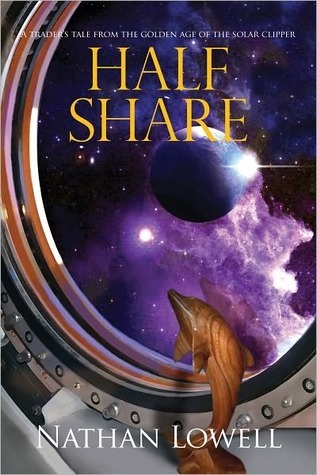 Well . . . that escalated quickly. In the previous book of the Golden Age of the Solar Clipper series, I found the plot to be engaging and well-paced, despite the naïveté of the main protagonist. Ishmael Wong seemed to be a bit lacking in his romantic knowledge, sometimes oblivious of obvious euphemisms. For a kid of only 18 who really only spent time with his mother, I can understand how he might not know these things. It was the one thing I found a little unbelievable in Quarter Share, but boy did Half Share make up for it.

Some of the plot felt a little formulaic and procedural by this point in the saga, which was good in the sense that it continued the realism and engagement of its predecessor. However, this also meant that there wasn’t as much progression of the sub-plots and minor characters like there was in Quarter Share. This book was definitely about Ishmael. In fact, it seemed like a large section was devoted to his “awakening” as a man. And this is where I felt the tone of the book swung way too far in the other direction.

For a character who was a bit embarrassed in “romantic”-type situations in the first book to suddenly flip a switch and be a suave player with the maturity and cunning of an experienced ladies-man bedding women much higher than his current pay grade felt like an overcompensation for the weakness of his character in Quarter Share. Granted, it was a necessary transition and development for the character, but I suppose I would have liked a more gradual transition to show his growth. Plus, since it seemed like much of this book was focused on his newfound manliness, there wasn’t much room for anything else than a new crewmate who had been abused on her home planet, leaving me wanting a bit more.

A well-written story that overcompensated for its predecessor’s weaknesses, I give Half Share 3.5 stars out of 5.