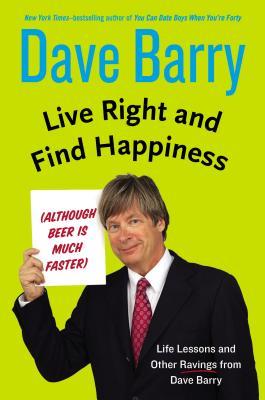 I grew up on the humor writings of Dave Barry. Each week I’d take his humor column to school and read it to my friends during my lunch break, laughing at his comedic style and funny topics. Consequently, I found myself enthralled by his books, each one leaving me in stitches due to his observational humor of the weird world around us (or at least around Miami, Florida). I was saddened when he decided to retire from writing these weekly humor columns. As such, each time he releases a new book full of his writings (mainly essays now), I usually pick it up out of habit.

While I can usually blow through one of Dave Barry’s books in a couple hours, I’m finding that I’m not nearly as amused as I used to be. It could be that I’ve grown up a bit and no longer find boogers as funny as I once did, but I think the issue lies at a deeper level of Dave’s writing. Where his previous books written during his heyday were all essentially centered around a common theme (Cyberspace, Japan, Aging, Home Repair, etc.) recently his books have been whatever he’s done most recently. The problem this creates is that each of the individual essays of the book is disjointed from all the other ones.

Essentially, even though it would mean a much longer hiatus from Mr. Barry’s humorous writing, I would enjoy his “themed” essay collections more than the ones he’s put forward in most recent three books. In fact, he could probably categorize them into three different books about international travel, teenage daughters, and current homeland topics. As it is right now, I’ll probably still buy Dave Barry’s books, but I’m not laughing as much as I used to.

Another adequate collection of humorous essays by Dave Barry, I give Live Right and Find Happiness 3.0 stars out of 5.