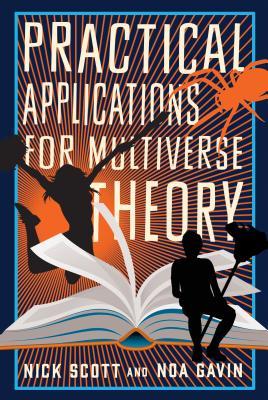 As someone who enjoys learning about the many interesting unknowns in our universe, the mere title of Practical Applications for Multiverse Theory  (2016) caught my attention from the get-go. The ideas of parallel universes coexisting in an invisible space next to our own is something I eventually want to cover in my own writing (tentatively titled The Slumberealm Saga). And while this book somewhat delivered on the premise of its title, it unfortunately did so through an incredible plethora of clichés. Due to the authors’ background in improv comedy, it’s clear that they merely wrote this book to capitalize on the style’s random nature.

I’m not sure who the target audience for this book might be, since the main characters are high school students who use an awful lot of foul language. I would think it’s aimed at being a Young Adult (YA) comedy, but most of the laughs seem forced and trite. Told from two different perspectives, Scott and Davey, both characters aren’t really that likeable, and neither of them change that much (if at all) by the end of the book. In fact, it’s almost obnoxious how Davey is essentially a jerk to everyone, especially Scott, even though it becomes incredibly clear she should be more accepting of him earlier on in the plot.

Speaking of plot, it seems to drag in quite a few places, especially in the beginning as both characters start noticing the multiverse collapsing in on their school. Unfortunately, due to the aforementioned clichés, the entire rest of the plot was pretty predictable, even if the different universes were quite random (and even that randomness was cliché). Nosebleeds indicating a fracture in spacetime, narcissistic cheerleaders, nerdy loners. Everything fits nice and squarely into the formula for a YA book (despite the obscenities). The problem with this is that the authors clearly saw they were writing clichés, because there were a few points that could have been cliché (like the two main characters falling in love), but just weren’t there at the end, thus leaving the reader somewhat unfulfilled. If you’re going to follow a formula, it needs to be followed in its entirety.

An easy and fast read with nothing much to offer, I give Practical Applications for Multiverse Theory 2.0 stars out of 5.