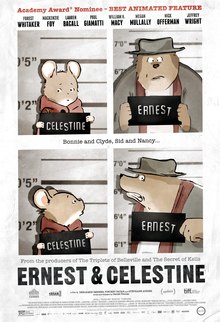 While the visuals of CGI-animated films can be quite realistic and stunning, there’s something to the simple, drawn lines of a classically animated piece. Often, the realism of CGI is actually a bit of a detriment as any human characters will start to fall into the “uncanny valley”, wherein our minds reject the characters because they’re close to being human, but there are still elements that can’t be captured and our minds pick up on these flaws. Granted, I will admit that the classical look can still be obtained with computers, but it’s nice to see every once in a while, especially with the proliferation of new animation studios.

Part of the challenge of standing out amongst the large number of animated films comes in the visual style used in the animation. With Ernest & Celestine (2012), the visual style doesn’t try to imitate any successful studio (like Disney), but instead attempts to recapture the look and feel of its source material. Done in simple lines with a watercolor finish, this film certainly deserved the nomination for Best Animated Feature back when it was made (if it didn’t lose to Frozen, I think it would have won). The beauty of the art helped to give the film a warmth and non-threatening ambiance that matched well with its themes of love and acceptance.

Despite the ridiculous nature of the economies represented in the film (all based off of bear teeth, apparently), there’s a message underneath the basic “stereotypes are incorrect” storyline. The two societies of mice and bears live adjacent to each other, but each is scared of the opposing species for a number of reasons that would make sense in the animal kingdom (bears eat mice, mice steal things, et cetera). Through the “odd man out” characters of Ernest (Forrest Whitaker) and Celestine (Mackenzie Foy), we find that not every bear wants to be a judge, and not every mouse wants to be a dentist. These characters epitomize the starving artist cliché, but it’s done in such a sweet and loving way that you’ll almost forget that the “do whatever you put your mind to” theme was done to greater effect years later with Zootopia (2016).

A cute film with a subtle hint of breaking the barriers of interracial love, I give Ernest & Celestine 4.0 stars out of 5.