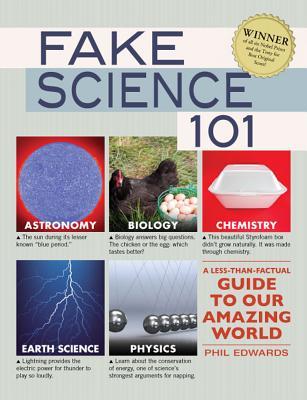 One of the challenges of creating content on the internet is that it is usually quickly and readily consumed and forgotten by the web-browsing public. Monetizing this content is even more difficult because of the aforementioned reasons. That being said, there are many ways the creators of internet content can make some money off of their product. Sometimes this takes the form of T-shirts or other, physical items, but oftentimes the choice of internet creators is a book. For Fake Science, which uses Tumblr for its regular posts, publishing a fake science textbook seemed like a good choice.

Unfortunately, since a lot of internet content is quickly consumed, an almost 300 page book seems a little tedious to read once the initial novelty of the idea wears off. There are certainly a lot of amusing bits in this book, but they tend to be lost in the noise of it all as the joke is repeated over and over again. Because it’s satire, knowledge of the factual science behind the jokes of Fake Science is almost necessary so the joke can be understood. Even though the parody of a textbook is well-done, the problem with this is you’re essentially reading a textbook from cover to cover.

Adding to the difficulty of just sitting down and reading a whole chapter is the fact that the satire almost makes it read like a mixture of science propaganda (which is inexplicably obsessed with tanning salons) and your wise-ass drunk uncle who heard about science second-hand and now thinks he’s an expert in it. By the end of the book, you’re just tired of reading a printed out section of the internet and merely want to go back to watching videos of cats.

A book for those who want a few science-related jokes and laughs amidst the dry formatting of a textbook, I give Fake Science 101 3.0 stars out of 5.