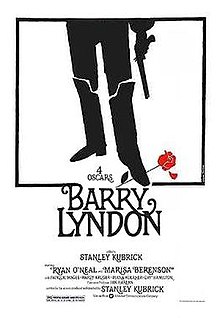 As someone who appreciates classic films, perhaps I had my hopes set a little too high for Barry Lyndon (1975). Going in, I already knew the technical challenges director Stanley Kubrick had to overcome to film indoors and by candlelight with no extra lighting. Of course, if that was the main thing I knew about this film before I actually sat down and watched it, that should have told me something about how boring the plot would be. Then again, even a master of cinema like Kubrick can only do so much with mediocre material.

I will give some credit where it’s due, though. Most of this movie did contribute to the tension of the climax. If certain events hadn’t transpired in the way they did, Barry’s (Ryan O’Neal) life would have been much different. Then again, the whole “rags to riches” storyline seemed overdone, even for the mid-1970s. And sure, duels can be exciting—with the honor and lives of men on the line—but I found this film had more duels than a Yu-gi-oh episode. This contributed to some of my boredom.

That’s not to say that Barry Lyndon isn’t completely unwatchable. Like I alluded to earlier, the cinematography looks fantastic. Most scenes could have easily been oil paintings hanging in museums (probably why the pacing felt so slow). The costuming and music were also exemplary, as would be expected of a period piece like this. I could definitely see where future films (like The Favourite (2018)) drew their inspiration. And while Kubrick’s versatility certainly makes this film a good part of his repertoire, I don’t think I could place it in my top five favorite Kubrick films.

A technical achievement that drags a bit in places, I give Barry Lyndon 3.5 stars out of 5.