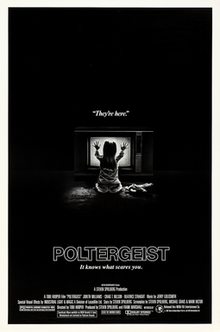 Some movies have spoilers, and then some movies have so deeply-ingrained themselves in the popular culture zeitgeist that it’s nearly impossible to not have some knowledge of them before actually sitting down and watching the film itself. Poltergeist (1982) is just such a film for me. I’ve seen it referenced on many different lists and other places that claim it to be a great horror film. I’ve also seen it referenced and parodied in several places (like The Simpsons). The combination of its notoriety and its parody meant that I had pretty much already seen this film before actually watching it.

Since I already knew the “big reveal” that caused the main characters’ house to become haunted, I had to watch this movie with a slightly different focus. Mainly: how and why has this film stood the test of time? Sure, it dates itself sometimes with its early-1980s style; however, the special effects for its time were particularly top-notch (all things considered). While only one of these special effects doesn’t seem that realistic by today’s standards, the rest of them make me wonder how they pulled them off at the time.

What’s refreshing with Poltergeist is its ability to be scary (albeit in a family-friendly way, ironically enough) but not resort to jump scares or gore like modern horror. Of course, its two sequels and 2015 remake apparently never lived up to its original creativity or timelessness. Still, while it’s been referenced to death (har har) in popular culture, I can now honestly say that I’ve seen this movie all the way through. Although this also means that I don’t likely need to watch it again.

Classic horror with notable special effects, I give Poltergeist 3.5 stars out of 5.