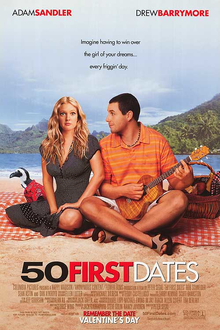 I don’t particularly care for Adam Sandler’s comedies. Most of them are crass and pull their jokes from bodily humor or the uncouth main character (usually played by Sandler). There are two exceptions to this: The Wedding Singer (1998) and 50 First Dates (2004). Since this is a review of the latter, I won’t go into the details of why I like The Wedding Singer. Instead, let’s talk about what works in 50 First Dates for me to recommend it. Yes, I’m not necessarily giving this a perfect “5-star” score, but I do think its story has enough merit that you should watch it.

As mentioned above, I don’t give this film a perfect score, mostly due to Adam Sandler’s comedy style. This is mostly exhibited in the first act of the plot, where we meet a reprehensible man, Henry (Adam Sandler), who basically only has sex with tourists so that he doesn’t have to deal with commitment. This could be an eye-rolling character flaw that we’d see ironed out at the end of the film if it weren’t also for the gross-out humor involved in this section. I’d almost be curious to see a re-cut version of this film that dispensed with this type of “comedy” and stuck to the parts of the plot that worked.

Much like Memento (2000) followed the life of a man with a special type of amnesia, 50 First Dates looks at Lucy’s (Drew Barrymore) amnesia from the perspective of the outsiders who have to watch her re-live the same day over and over again. There is a certain amount of Groundhog Day (1993) charm involved with Henry trying to break through her amnesia. Sure, a scumbag like Henry isn’t someone who I’d usually root for, except that he learns the value of commitment for something (or someone) greater than himself. The emotions involved in this setup are heartbreaking, and I still cry when I watch it.

Two watch-worthy acts in a three-act Adam Sandler comedy, I give 50 First Dates 3.5 stars out of 5.