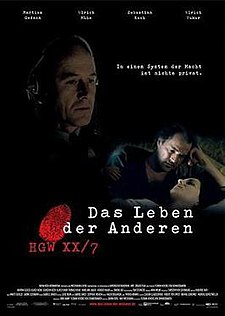 Quantum Physics holds to a belief that you can never truly observe something without affecting it. The mere act of observation alters the state of the thing being observed to the point where we can never be sure of the accuracy of the observation. I say all this to set the stage for the wildly tense and enthralling Best Foreign Film Oscar-winner, The Lives of Others (2006). There’s this weird dichotomy between voyeurism and being able to play God that makes this film so entertaining to watch, especially in the modern, surveillance-heavy society in which we live today (of which Person of Interest does an excellent job of exposing).

Set in one of those rare historical moments right before the fall of the Berlin Wall, The Lives of Others hinges on the superb performance of Ulrich Mühe as the audience is never quite sure what he’s going to do with the information he gleans from the individuals living beneath his surveillance station. There are vibes of Rear Window (1954) and Doctor Zhivago (1965) in The Lives of Others. The former speaks to the voyeurism and what one can do if they see or hear something that shouldn’t be seen or heard. The latter dives into revolution and how entangled romantic and artistic lives can become with it.

Aside from some fantastic and almost heartwarming plot twists, the suspense in this film is palpable. This suspense is only heightened by the incredible soundtrack that amps up the intensity when the audience knows what the people under surveillance do not. In the end, though, stories like this help emphasize the importance of individuals who see what’s wrong with a regime and comply with the rulers…up to a point. Like Schindler’s List (1993) before it, some of the true heroes of revolutions are those who are employed by the enemy and make it a point to be a force for good.

An expertly filmed exposé on state-mandated voyeurism, I give The Lives of Others 5.0 stars out of 5.