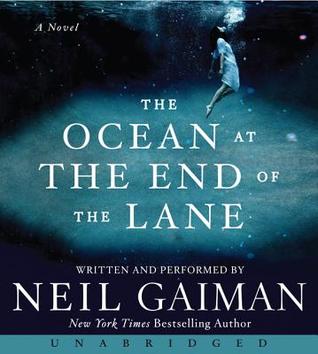 It’s nice to know that Neil Gaiman can write engaging, modern fairy tales that are longer than the short story format. The Ocean at the End of the Lane was a delight to read, and I can see some parallels to other famous middle-grade fantasies (the Narnia series came to mind here and was mentioned in the book). Everything about this story made sense, and the character and the world-building were top notch—which I’ve just come to expect from Gaiman’s work. Truly, he continues to be the modern fairy tale maestro.

One of the unique aspects of this story was how it seamlessly integrated the magical and the mundane. So often, these types of fairy tales transition to a world of magic and leave the boring, ordinary world behind. Not so in The Ocean at the End of the Lane. If anything, using the supernatural to explain some of the challenges of our childhoods helps sell the storytelling here. Sure, there are moments in magical places, but the majority of the book has cleverly-hidden magic present in the real world. It’s easy to have everything in a realm be magic; it’s much more challenging to mix the two.

I will warn those who would want to read this to their children that perhaps the children should be a little older, or you should be prepared to explain some of the content in it. Nothing is graphic, per se, it’s just better to know how to answer any questions when adult situations are described through the lens of a young boy’s experience. Of course, anyone who’s read any amount of Gaiman would know that his fairy tales are more on the “adult” side of things. However, if you haven’t dipped your toes into Gaiman’s writing before, this is an excellent place to start.

A wonderful fairy tale mixing of fantasy and reality, I give The Ocean at the End of the Lane 4.5 stars out of 5.