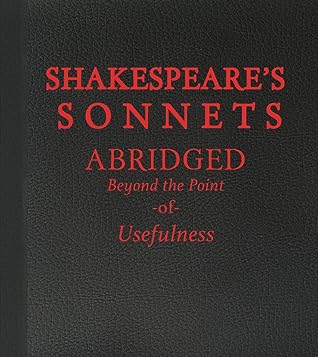 The third (and currently last) book in Zach Weinersmith’s “Abridged” series, Shakespeare’s Sonnets: Abridged Beyond the Point of Usefulness is by far the best of the set. While Holy Bible: Abridged was quite rough, and Science: Abridged showed promise, Shakespeare’s Sonnets: Abridged is wholly focused on its subject matter—and it shows. To top everything off, Weinersmith cleverly sums up each of Shakespeare’s sonnets in his own rhyming couplet, adding to the overall experience and maintaining some semblance of the poetry involved with the source material. If anything, reading all the truncated sonnets together helped paint the picture of what Shakespeare was trying to accomplish.

Gaining the 10,000-foot view of all the Sonnets together is a useful exercise for anyone who might focus on the particulars of comparisons to summer days. While Shakespeare’s adherence to iambic pentameter is admirable in the context of poetry in general (especially for so many sonnets), the words themselves show his wit—if in no other way than to make complaining seem like an art form. I definitely find irony in this book, though, as the abridged nature of all Shakespeare’s Sonnets was far from being useless to me.

An extremely handy overview of famous poems written in its own poetic way, I give Shakespeare’s Sonnets: Abridged 4.5 stars out of 5.