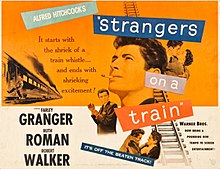 It’s a wonder after all these years that a Hitchcock film like Strangers on a Train (1951) escaped me until now. Sure, Hitchcock used trains in many of his films, but the premise here is so diabolically intriguing that it demands a viewing. After all, there’s an amount of logic involved with two strangers swapping the murders that they would like to happen to those tormenting them. And yet, Bruno Antony (Robert Walker) is so unsettling in his ability to follow through that the suspense of the rest of the movie practically films itself.

Several camera tricks that Hitchcock uses adds his signature flair to this movie. From a punch to the face to a tension-filled series of shots at the bottom of a storm drain, the cinematography in Strangers on a Train is yet another reason why people need to watch this film. This being said, the ending (despite being semi-ridiculous on an out-of-control carousel) is a little weak and wraps things up almost a little too cleanly. But considering that’s basically my only complaint about the film, there are enough things that it does right that lead me to recommend it.

I do find it a little curious how this movie didn’t rise to the ranks of Hitchcock’s best, though. True, it probably isn’t up to the level of Psycho (1960), North by Northwest (1959), or Vertigo (1958). Perhaps he was still in the early stages of figuring out his oeuvre (which likely solidified by Rear Window (1954)). He’s always been a filmmaker who advanced the technique of cinema. Perhaps Strangers on a Train didn’t progress the state of the art as much as his other films did, thus leaving it in semi-obscurity. If anything, this movie is a good stepping-stone between mediocre thrillers and the genius of Alfred Hitchcock.

A lesser-known gem of Hitchcock’s career, I give Strangers on a Train 4.5 stars out of 5.