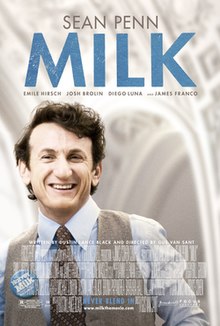 It seems like there are biopics for almost every notable person who has done anything significant in the last 50 years. In the case of Milk (2008), we get a peek into the personal, professional, and political life of gay rights activist Harvey Milk (Sean Penn). Unfortunately, as is the case with most biopics, I have found that the titular character is good at enacting societal change but at the cost of their relationship with a significant other. To me, I generally throw my hands up in the air and yell, “Come on!” when this happens since it seems to be ubiquitous with the genre.

While I don’t mind watching a film about the activism behind gay rights, I do mind having to watch Sean Penn and James Franco make out. What struck me as odd was a portion of the film where people were encouraged to come out as being homosexual, which a majority of these characters probably never had to do because they were so flamboyantly gay as to erase any suspicion. Still, it was weird to see a time when these individuals weren’t accepted for who they were, even in the now-famous/infamous town of San Francisco.

I can appreciate that this movie shows the long process that Milk took to gain the recognition and power to affect change. The fact that a martyr was used to push these efforts over the edge is a bit sad, though. Still, just once, I’d like to watch a biopic where the main character remains faithful to their significant other, especially with all the help they usually receive from them when they’re starting out. If anything, this character flaw might humanize these people, but at the detriment of the message they’re trying to get across to the audience.

A reasonably standard biopic about a critical figure in the gay rights movement, I give Milk 3.0 stars out of 5.