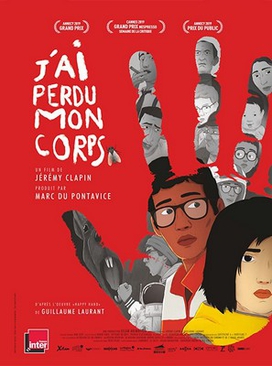 Some movies can only be done with animation. Whether it’s the fantastical or alien nature of the content or the visual aesthetic trying to be achieved, animation is pretty flexible with what it can do. Enter I Lost My Body (2019), which is a prime case study in the power of animation. Sure, this could have been done up in realistic CGI, but then it would probably be more in line with the horror genre than the “slice of life” (har har) we have on display here. Either way, I have never seen an entire movie centered on a severed hand trying to get back to the body that lost it…until now.

With hints of Homeward Bound (1993) and The Addams Family (1991), I Lost My Body plays out in parallel with the strangely-relatable severed hand and the flashbacks of the whole body, Naoufel (Dev Patel). At times heartfelt (even in the severed hand timeline), this film’s visual style is its main selling point. There’s a roughness to the animation that is fluid and full of life, but with enough accuracy that it never veered into the absurd—which would be easy to do considering the subject matter.

While never too gross (it is a movie about a severed living hand after all), this movie is just a bit too weird to be able to appeal to everyone. Sure, it has some excellent character moments—the scene with the lobby intercom being one of the best I’ve seen—and its tension is palpable in places. Still, the ending feels a bit soft, considering everything the audience sat through until then. Granted, the flashback portion of the film concluded (in a way I’d expect Arrested Development fans might chuckle at) so there wasn’t much the severed hand storyline could do after that.

An animated film with distinct style and subject matter, I give I Lost My Body 4.0 stars out of 5.