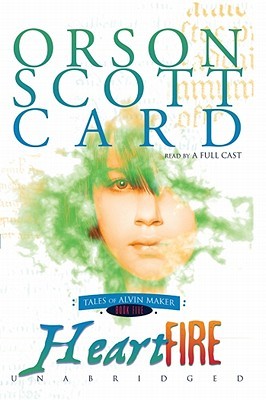 It’s been a while since I read this far into a series, and I can start to see why I like trilogies and stand-alone books. If I didn’t know any better, I’d think this series had evolved into a courtroom drama instead of a historical fantasy. At this point, the whole premise of this series seems to have veered off course and has lost its focus to tackle unrelated issues that were somewhat prominent at the time. Or, at least it’s merely acting as a chance to name drop historical figures and take the side of history against well-known issues that haven’t aged well over time.

If anything, Heartfire could have easily been the fourth book in the series, since Alvin Journeyman added nothing to the story. Even so, Heartfire didn’t feel as strong as earlier books in the series. It almost seems like there’s more of a focus on world-building. There is less focus on actually progressing the story—like the path toward the Crystal City. Certain plot elements were almost entirely forgotten as well, even if there was a whole legal battle in the last book to re-hash how Alvin came into possession of a sentient golden plow (which itself is still unclear why it’s important).

By now, I’m merely reading the series on autopilot just to see if there is any conclusion to the alternate history presented here. I still think there are clever takes on historical figures, but by now, they seem added in as a heavy winking nod to the reader, most of whom will already know the referenced individual. Perhaps the lack of overall character growth in this book is what made it such a so-so read for me. Sure, there were baby steps toward some redemption arc, but in the end, nothing ended up changing the drive of the overarching story.

Another weak link in the Alvin Journeyman series, I give Heartfire 3.0 stars out of 5.