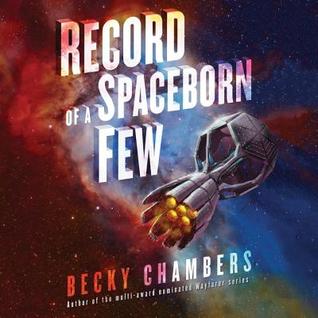 Considering that A Closed and Common Orbit was only loosely related to the first book in the Wayfarers series, I knew that I shouldn’t expect the third book in this series, Record of a Spaceborn Few, to have any significant connection to the previous books. Unfortunately, even the several different storylines in this book were hardly connected, seeming more like a series of short stories that were inter-cut between themselves. While Chambers’ world-building and dialogue are still top-notch, there isn’t anything in this book other than some boring characters living their boring lives.

I understand that any author worth their salt will develop vast amounts of details about the universe they create. However, most authors leave the aspects of the minutia and banal day-to-day lives out of their writing in favor of an actual plot with actual conflict. Instead, this book is filled with the details of world-building and nothing else. If these characters were better connected, or there was a stronger plot driving their stories, it would have maintained my interest. Unfortunately, most of the stories of these characters’ sub-plots are too generic and trope-like for me to care about any of them.

About the only reason I’m giving this book as high a rating as I am is due to the aforementioned writing on the part of the author. The actions and consequences are clearly thought out, and there is a realism to the dialogue that continues from the previous two books (but by this point makes a lot of the characters sound the same). If anything, this book should have been the first in the series. It should have introduced the universe and the stakes that anyone who ventures out into space is sure to face. The fact that it’s (in my opinion) the weakest in the series is probably why more exciting adventures were written for books one and two.

A disappointing and boring record of space, I give Record of a Spaceborn Few 2.5 stars out of 5.