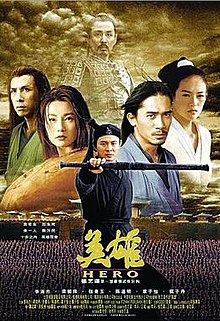 After the success of Crouching Tiger, Hidden Dragon (2000) in most of the worldwide markets, it’s no wonder that a film like Hero (2002) would make an appearance. Capitalizing on the choreography and visuals that brought Crouching Tiger, Hidden Dragon success, Hero takes these acrobatic battles to the next level, even to the point of them becoming ridiculous and semi-cartoonish. Add to this the deliberate color theming for each of the film’s different sections, and Hero almost becomes a piece of art in its own right. It’s almost a shame that there haven’t been more movies like this in the years since.

While some of the CGI hasn’t aged well since 2002, and the acting can sometimes be too flat or too over the top, the story is still entertaining. The language barrier did make it slightly confusing at times, but the twists were top-notch. It did help to have the “framing” of the throne room to not only show the progression of the story but as a separation between the different colorful acts. If anything, it also added to the conclusion of the plot and the surprising ending that I didn’t quite see coming.

Partly because I watched this film in its original Chinese, I found the visuals to be so beautiful to the point of almost being distracting. How often was I watching some visual spectacle, only to realize I wasn’t entirely sure what the characters were talking about during the scene. It does help that the plot is simple enough to pick up the missing pieces and understand what’s generally happening. In the end, though, Hero is a visual treat in many regards, and it should be held as a high standard for what visual art can be in the hands of those who understand it.

A visual masterpiece of color and choreography, I give Hero 4.0 stars out of 5.