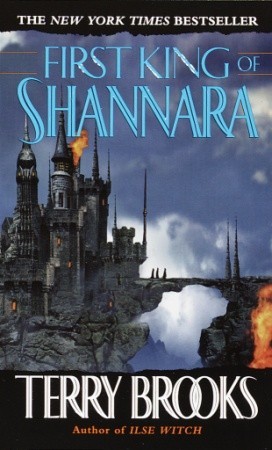 While this prequel to the original Shannara trilogy was written well after completing the first three books, First King of Shannara failed to re-capture the magic that made me adore Wishsong of Shannara. If anything, this book seemed unnecessary. It told a story that already had a fixed ending as described in the exposition of The Sword of Shannara (which itself had a pretty un-climactic ending if I remember correctly). Sure, there’s a lot more world-building in this book, but only avid fans of the series will find any of it interesting.

Perhaps my main gripe with this book is how I failed to care for any of the characters. Most of their interactions felt cliché and trite, and there was a smidge too many of them for me to want to take the time to know who they were. If anything, the characters were flat stereotypes with no personality. This was also not helped by the plot, which most of the time sounded like a condensed and bulletized list of events instead of an actual story. Sure, the writing may have been more polished since The Sword of Shannara, but this book merely highlighted elements of the series I never really liked to begin with.

I think some of the navel-gazing that occurs in these high fantasy series is what turns me off from exploring the huge tomes filled with so many words but signifying little. Some of the action (including the war at the end) was exciting, and some of the descriptions of certain events (like the forging of the sword) was creative and flowery, but these few bright points do little to distract from the fact that a lot of the book was bloated word count for inflated word count’s sake.

An unnecessary prequel, I give First King of Shannara 2.5 stars out of 5.