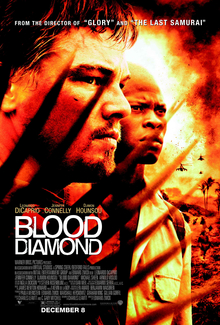 For years, I had heard about Blood Diamond (2006) from a variety of different viewpoints. Many friends would mention it about either Leonardo DiCaprio’s accent, the tense action, or the diamond industry as a whole. After a while, I made it a point to eventually see this film, even if I wasn’t sure when that would be. It took a while, but I did eventually have this chance, and I’m glad that I took it. Sure, Blood Diamond is a little difficult to watch in the sense that there are aspects of the African diamond industry that are straight-up human rights violations. However, it is important to know these things are going on to become informed about our world.

The fact that there have been (and likely still are) child soldiers being brainwashed by ruthless rebels to overthrow the governments in Africa is a sobering thing to watch and a heartbreaking realization when you see how it plays out when a father and son are separated. Much of the problem comes down to the diamond industry forcing a high value on these objects that are a manufactured scarcity by the companies profiting off the bloodshed and destruction of these African nations.

While Blood Diamond isn’t entirely perfect (it has its fair share of clichés and tropes), it is something I think most people in the United States should watch. Sure, the 1999 setting might be a little out of date 20 years later, but how are we to know that these conditions still don’t exist over there? Some laws may have been passed to help stem the flow of blood diamonds into the system, but there are plenty of ways around these restrictions. Both legal loopholes and opportunistic individuals who want to make some money off the suffering of others have perpetuated this problem.

A difficult film to watch, but one people should definitely see, I give Blood Diamond 4.0 stars out of 5.