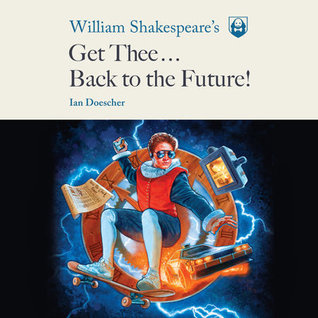 Having already listened to the audiobooks for the Shakespearean versions of the original Star Wars trilogy, I was curious to see how another beloved pop culture film would fare with the treatment. Get Thee…Back to the Future! had a bit more of a challenge when compared to the Star Wars stories. First, as the plot is set in (relatively) modern times, much of our technology had to be “explained” in Shakespearean format (e.g., a car is “a horseless carriage born on fumes of gas and flame”). At least the Star Wars stories seemed to fit in the Shakespearean timeframe a little better.

Despite this clash of modern and medieval, the transformation into Shakespearean form does end up working. I’d probably compare this to some of his comedies like Taming of the Shrew, 12th Night, and Much Ado About Nothing, if for no other reason than the comedy of errors involved with Marty being hit on by his mother. I did appreciate some of the more heady references that were thrown in to make it seem more akin to something from Shakespeare’s era (the constant oedipal references were foremost among them).

One thing that seemed to be missing from the audiobook version of this was the sound effects and music that helped accentuate the Star Wars stories. Granted, Back to the Future didn’t have much in terms of sound effects. However, the music is iconic enough that it would have made a welcome addition. And by music, I mean Alan Silvestri’s score, since all the “pop songs” were addressed in the narrative and motif. Either way, it’s a short read and a fun little experiment to see how the “father of modern drama” can enhance (or ruin, depending on your tastes) our modern favorite films.

The Shakespearean comedy I didn’t know I needed, I give Get Thee…Back to the Future! 4.0 stars out of 5.