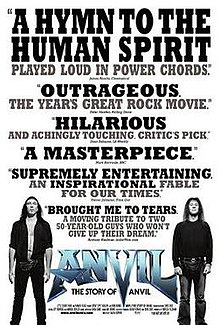 Anvil! The Story of Anvil (2008) is one of those movies I sat down to watch because it’s on the 1,001 Movies You Must See Before You Die list. Before watching this film, I honestly had never heard of this Canadian heavy metal band, and it soon became apparent why. What immediately struck me was how similar the premise was to the 1984 mockumentary, This is Spinal Tap. It was difficult to separate this real-life story of the rise and fall of a heavy metal band with the Rob Reiner comedy since so many of the beats of the plot seemed to match up.

Still, it was somewhat engrossing to see how Anvil! followed the progression I’d already seen in Spinal Tap. At first, I thought, “Is this for real?” This was before I realized that perhaps the reason why Spinal Tap worked so well was because that’s just how the music industry functions and has functioned for over 30 years. Granted, some of the interpersonal elements of this movie felt a little overly dramatic—like a reality television show. Of course, this also gave the film quite a bit of heart. It was clear the band wasn’t really in it for massive success, but because of the fans and because they enjoyed playing the music.

The fact that the ending of Anvil is slightly different from Spinal Tap should give fans of the latter reason to watch this movie. If anything, the ridiculous nature of the heavy metal community is entertaining to watch. Adding in Canadian elements to the heavy metal band formula was also amusing as well, considering how harsh the heavy metal sound is when compared to the stereotypical kindness of the Canadian people. In the end, Spinal Tap might have done this story better decades ago, but Anvil! makes it real.

A real-life version of This is Spinal Tap; I give Anvil! The Story of Anvil 3.5 stars out of 5.