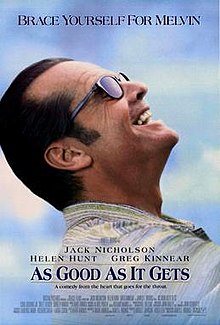 I’m not sure how it’s taken me this long to sit down and finally watch this movie. I’ve enjoyed other films by James L. Brooks, like Terms of Endearment (1983) and Broadcast News (1987). If anything, As Good as it Gets (1997) is almost like the end of the trifecta of Brooks films, considering how well-received by critics they are. When it comes right down to it, the appeal of these movies is the characters. There’s a heart and realism rarely seen in comedies (most of which resort to stereotypes and fart jokes to get a laugh).

As a more intellectual comedy, As Good as it Gets manages to bring together three unlikely people and push their boundaries to grow as characters. Of course, it’s somewhat easy to do this with abrasive characters like Melvin Udall (Jack Nicholson). After all, actively trying not to be a jerk is great growth potential. Additionally, other characters grow through their tragedy, but their comedy comes from having to rely on someone who doesn’t have the social skills to be friendly or tactful. Sure, these character flaws are easy to explain away by Melvin’s condition, but they’re still funny, nonetheless.

Aside from some cringe-worthy moments involving Melvin (which haven’t aged well over 20+ years), my only other qualm with this film is the age gap between him and Carol Connelly (Helen Hunt). It seems a little too large (~26 years, by the way) to be believable in these romantic situations. Still, despite some technological and fashion elements that date this film, the core content is relatively timeless. I’d consider it at least on par with Brooks’ other successful films at the very least.

A James L. Brooks classic for fans of Terms of Endearment and Broadcast News, I give As Good as it Gets 4.0 stars out of 5.