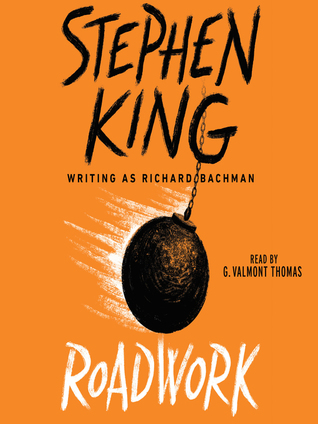 I wasn’t aware of Stephen King’s Richard Bachman pseudonym until I picked up this book to read on a whim. While it’s clear all of King’s technical prowess is still present in Bachman’s work, the “king of horror” gained a chance to write outside his genre. Of course, King has done this before with a few different books (like Hearts in Atlantis, The Green Mile, and The Dark Tower series), but writing under a pseudonym seemed to unleash an amount of cynicism I’ve hardly seen in King’s writing before.

Written in the early 1980s, Roadwork exhibits all the identifying marks of a cynic who has been over-saturated with consumerism. The need to have a job to support a family by buying a house that needs to be filled with the accouterments of modern living is a bit too much for some people. This is especially true for those who don’t quite meet the standard of the “American dream” in their own mind and have no other course other than to wallow in self-pity. By now, it’s practically a tale as old as the industrial revolution. Unfortunately, this means Roadwork doesn’t stand out much in my mind as an original story.

Perhaps Roadwork was one-of-a-kind back when King wrote it, but I doubt that was the case. Heck, the beat poets of the ‘60s and ‘70s certainly wrote about separating themselves from the toxic consumerism shoved down their throats. Roadwork almost felt like a “paint by number” novel that covered all the basic items in a story of this kind, checking each box until it reaches its obvious and inevitable conclusion. While it was nice to read something by Stephen King that wasn’t necessarily beholden to the fame of his name, I’m not sure if I would have read it if he wasn’t attached to it at all.

A so-so cynical work that is hardly original enough to mention, I give Roadwork 2.5 stars out of 5.