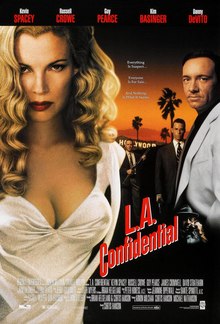 There are police dramas, and then there are police dramas set in Los Angeles. Something about this town makes the crimes that much more interesting. Maybe it’s the intersection of fame and criminal activity. Perhaps it’s that the crimes are so much more grandiose due to the wealth of the area. Whatever the reason, L.A. Confidential (1997) is a fantastic film that manages to show different perspectives of the seedy underbelly of the glamor and glitz that makes the town so successful. If it weren’t up against Titanic (1997), it probably would have won a lot more awards than it did.

It’s almost surprising how many famous actors are in this film. Sure, some of them were unknowns at the time. Even within three years, we’d see Guy Pearce in Memento (2000) and Russell Crowe in Gladiator (2000), both rising into their stardom. This is not to mention the fantastic performances by Kevin Spacey, James Cromwell, Danny DeVito, and Ron Rifkin. I’d be amiss to leave out Kim Basinger’s Oscar-winning performance as well. Of course, with so many great actors in this film, it can be a little challenging to determine what storyline to focus on. This is my only qualm.

Maybe these stars made the 1950s L.A. drama more entertaining, or perhaps the whole mystery and corruption surrounding the police department were enough to drive this movie forward. The twists were foreshadowed a bit, but were still shocking and made absolute sense. I particularly enjoyed the action sequence at the end. The three police officers involved with this case (Pearce, Crowe, and Spacey) had different perspectives about how to serve the community, and the epic conclusion brought these disparate views together in a satisfying way.

A hidden gem of a movie filled with fantastic characters and moments, I give L.A. Confidential 4.5 stars out of 5.