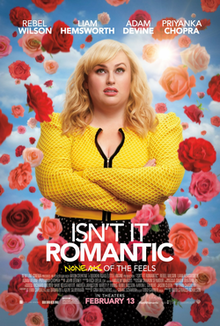 I generally enjoy “self-aware” movies. Those films that know which genre they’re in and make fun of it the entire time. While it’s entertaining to see all the various tropes of a particular genre exposed in this method, these films still have to abide by these rules as well. This has been done to varying levels of success for action movies (Shoot ‘em Up (2007)), Disney movies (Enchanted (2007)), and superhero movies (Deadpool (2016)). Filling the hole of the self-aware romantic comedy is none other than Isn’t It Romantic? (2019). Despite not being terribly into romantic comedies, this self-aware film piqued my interest.

Isn’t It Romantic? doesn’t necessarily fully commit to the self-aware theme. Instead, it encapsulates the ridiculous romantic comedy bit in the framing of a coma. The main problem I had with doing it this way was that Natalie—the main character played by Rebel Wilson—realizes she’s in a romantic comedy fairly quickly. However, she still seems surprised at each of the clichés she encounters along the way. This, despite the fact Natalie’s clearly an expert on all these tropes from years of hating the genre. Maybe that’s the other flaw: the main character hates the fact that she’s in this ridiculous predicament.

Even though this movie does eventually check all the boxes of a romantic comedy (both in the coma and in real life), I do have to say that the one significant aspect I appreciated in Isn’t It Romantic? is its eventual concluding realization. In this world filled with social media likes and approval, it’s essential to recognize the true center of a person’s love life has to start somewhere other than from the perspectives of other people. This is a quality rarely exhibited in romantic comedies, so its inclusion was quite refreshing.

A self-aware romantic comedy that nails its central point, despite hating itself along the way, I give Isn’t It Romantic? 3.0 stars out of 5.