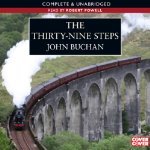 It’s weird to think that stories like The 39 Steps have only been around for 100 years. Perhaps their ubiquity in modern action thrillers has made me numb to their “man on the run” plotline, but I didn’t find this book to be as interesting as I had expected. Sure, it’s short, but how many of its twists and turns were merely repeating the same way of escaping the main character’s pursuers time and again? And perhaps that’s the main issue I have with this book: the main character seemed to be too skilled at eluding capture for it to be believable.

I know the “wrong man” trope that thrusts an ordinary person into these kinds of circumstances isn’t as realistic as it could be, but when Richard Hannay just happens to know exactly what to do at each instance, I wonder how “ordinary” he really is. Don’t get me wrong, the chase is exciting, it’s just oddly convenient for the protagonist. Of course, maybe I was already ruined by having seen Alfred Hitchcock’s version of this story in The 39 Steps (1935), which added in elements of romance and changed some key plot points.

In the end, The 39 Steps still stands as one of the originators of its genre. Even if the style has morphed and evolved over time, it’s essential to recognize where it came from and what its early influences were. If you’re interested in the history associated with the genre, then this book for you. Heck, if you have a few hours to kill in an airport or waiting room, this book might be the ticket. Just don’t expect much out of it other than some slightly-entertaining distraction.

A basic, if perhaps unbelievable story, in the early action-thriller genre, I give The 39 Steps 3.0 stars out of 5.