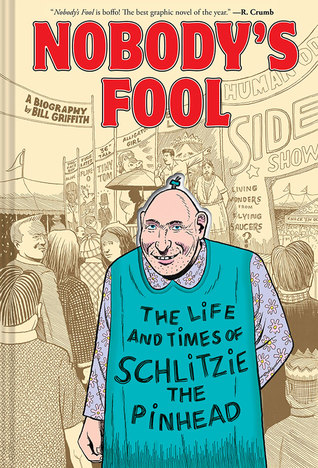 When I was growing up, I occasionally read Bill Griffith’s comic strip, Zippy the Pinhead. While the absurdist humor was a bit above my head at the time, the titular character stuck with me. Fast forward to when I won a giveaway copy of Nobody’s Fool. I thought this was going to be a fake biography about the origins of the comic strip character; I was surprised to start reading and find so many real-life details from the 1930s. I thought it was an odd detail to include a fictional character in a well-known cult classic like Freaks (1932) until I realized that this story wasn’t fictional. It was about the real person who inspired the character of Zippy the Pinhead.

Of course, I didn’t come to this realization until I was about half-way through the book. Griffith’s self-insert around this point helped to confirm my suspicions. While the author’s research was quite thorough—I’d even go so far as to say it’s the most comprehensive study of a somewhat obscure human being—it did seem to be quite repetitive in its narrative. Even if the crisp and fantastic illustrations filling this book’s pages were perhaps the best part about it, I can’t help but think that there are only a few pages of actual written content here if you distill it down to the story itself.

In the end, if you’re interested in Griffith’s art style, or want to learn about the life of a sideshow entertainer, then Nobody’s Fool is a book for you. I’d honestly say that Griffith’s art would be the main draw for this book since the Wikipedia article on Schlitzie contains about 80% of the content of this biography. It’s not that I didn’t like Nobody’s Fool, it’s more that it wasn’t what I was expecting.

A thorough biography about a somewhat obscure circus sideshow attraction, I give Nobody’s Fool 2.5 stars out of 5.