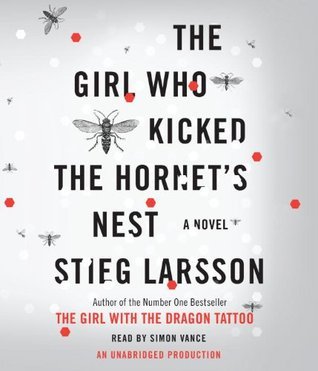 Now that I’ve finished the third book in this series, I realize it falls into the “trilogy conundrum” of having a strong, standalone first part, followed by two sequels that rely on each other to finish out the story. Heck, The Girl Who Kicked the Hornet’s Nest should have just been Part 3 of The Girl with the Dragon Tattoo since it completed the story arc started back in book one. I had my suspicions this book would continue from the exact moment where The Girl Who Played with Fire ended. After all, there were a ton of loose ends, and the story ended abruptly.

Part of my issue with this book was that it was primarily tasked with tying up all the subplots from the first two books. However, it still felt like it needed to spend time on new storylines that didn’t add much to the overall plot and were only there because the main character wasn’t able to do anything interesting. I also didn’t particularly like how some of these story elements concluded, as they felt unfulfilling (the resolution of the conflict with Lisbeth’s father stands out in particular). Overall, these two qualms made the book drag on longer than I think it should have.

There were still some positive elements in this book, including the trial of Lisbeth Salander. In fact, this coup de grace was by far the most entertaining section of the entire trilogy. I also appreciated the tension created early on when Lisbeth was in the hospital, as well as the action in the Epilogue that tied up the very last loose end of the trilogy. In the end, I still think this trilogy was a good read. It’s just that its final volume felt a little bloated and distracted at times.

A mostly satisfying conclusion to the original Millennium series, I give The Girl Who Kicked the Hornet’s Nest 3.0 stars out of 5.