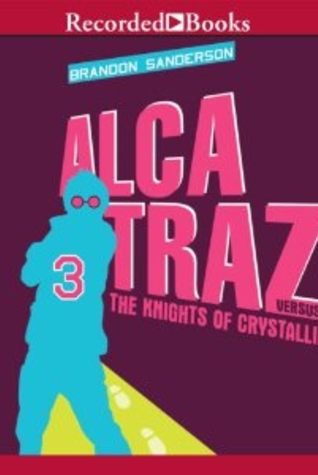 You know, it’s difficult to review a book that already highlights its flaws in the text itself. Part of me wonders if the reviews from the second book in the series were bad enough to warrant this kind of meta self-awareness. In the end, while Alcatraz Versus the Knights of Crystallia does take the time to address these weaknesses in its story and characters, it still doesn’t excuse the fact that they’re in there in the first place. These winking soliloquies seem to gloss over the fact that the book knows what’s wrong with it, but instead decides to gloss over it with self-reference instead of fixing the root of the problems themselves.

By this point in the series, I have come to terms with its middle-grade silliness and occasional bathroom humor. I loved the rule-breaking first book in the series, only to become annoyed by this constant fourth-wall breaking that happened in book two. By book three—this book—I finally came to terms with the fact that I’m not the target audience for this book, despite how well-written it is and how intricately its fantasy world has been created.

Perhaps due to my acceptance of this series for what it is, I felt the plot and character development were better in this part of the series—even if it did seem to trend toward “after school special” territory more often than not. Not only did we get to see more of Alcatraz’s parents (although, not nearly enough in my opinion), there was a lot more world-building that helped to flesh out this strange land introduced in previous volumes. Plus, the character who was a former librarian was (and is) probably my favorite character in the series right now.

More of the same self-aware silliness from Brandon Sanderson, I give Alcatraz Versus the Knights of Crystallia 4.0 stars out of 5.