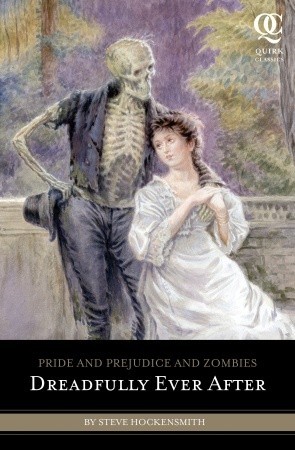 I think, overall, I prefer the prequel and sequel to the original Austen/monster mashup. It probably helped that both were written by the same author, who was essentially writing fan fiction based on the idea that this romantic classic could be combined with the undead. Dawn of the Dreadfuls had the problem of needing to set up Pride and Prejudice and Zombies, thereby negating any dire threats to the main characters since they would need to appear in the next book. However, Dreadfully Ever After does an excellent job of adding the complexities of marriage in proper English society in the zombie apocalypse to the mixture. Thus, this book expanded the universe instead of just poking around its never quite fully-explained origins.

In fact, one might be able to read the books on either side of Pride and Prejudice and Zombies and get a coherent and satisfying story out of it. I, for one, struggled through Austen’s writing, so the more modern style presented in Dawn of the Dreadfuls and Dreadfully Ever After was a welcome change. Plus, with the ability to stray from the source material and add additional characters in both “bookend” books, there is a continuity that is satisfying to conclude in this book. In the end, though, the two books that expand the Pride and Prejudice and Zombies universe don’t ever take themselves that seriously and are a fun and silly read for anyone who had a passing fancy to get into the topic.

A fitting and silly extrapolation of the idea that Jane Austen’s book needed more gore and violence, I give Dreadfully Ever After 4.0 stars out of 5.