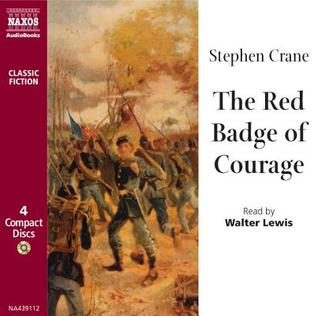 War is an ugly thing full of death and destruction. While most books written today bemoan this fact and complain that wars should never start in the first place, what do the individual soldiers handle a war that they didn’t even start? Set in the Civil War, The Red Badge of Courage is perhaps the best representation of the growth of a soldier from a deserter to a courageous fighter. Our intrinsic fear of death is what motivates so many of us to do the things we do to survive. Overcoming that fear and charging headlong into battle does take a measure of courage usually not present in most people.

Stephen Crane does a fantastic job weaving the story of a young man who has to learn what it truly means to earn the titular “red badge of courage.” His prose is almost poetic as he describes the landscapes, battles, and people who were forced to endure this historic war between brothers. There’s realism to the narrative that immerses the reader into the era and the battles that helped to define the war as a whole. In the end, though, this book could almost be set during any period and any war; the themes present within it are that timeless.

While it took me this long to finally sit down and go through this book, I’m glad I finally did. I had started it many years ago but lost interest for some reason. This time around, I was able to appreciate the story based solely on the strength of Crane’s writing. I know this book is usually assigned to elementary school students at some point, but if it has escaped your “read” list as it did for me, then I would urge you to pick it up and give it a read. It won’t take long, and it’s certainly worth the time spent reading it.

A timeless classic that deals with the human side of war, I give The Red Badge of Courage 4.0 stars out of 5.