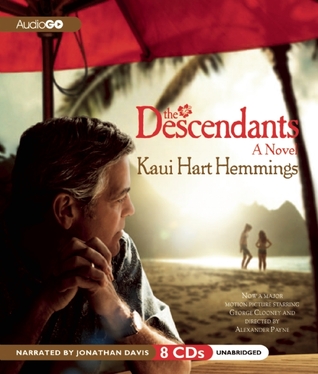 On paper, the plot of The Descendants almost sounds like a bad soap opera. A man who has the deciding vote that could mean wealth for him and his extended family is dealing with an unfaithful wife who is in a life-threatening coma. The execution of this plot, however, brings so much humanity to the forefront that I wouldn’t be surprised if any of these events were real. While I loved the movie adaptation of this book, the first-person narrative of the book helped add so much more depth to the story. It’s difficult to get into the main character’s head when there’s no internal monologue like in the movie.

Of course, with such realistic and vulnerable characters, there were bound to be a few that I didn’t like. Ironically enough, I hated the comatose wife. Sure, her husband was probably a bit of a workaholic, but he always meant well and was practically saint-like in his dealings with her, her family, and her friends after her accident. I think the most significant part of my dislike of the wife was how much she seemed to screw up her kids. Throughout almost the entire book, the main character is trying to control his out-of-control daughters, and it becomes abundantly clear where they got their tendency for poor life decisions.

In the end, I probably wouldn’t like the wife character if I met her in real life, which is why I didn’t like her in this book. That says a lot about the realism of the writing here. To be able to create a character that I reacted to on an emotional level (even if it was a negative emotion), with nothing more than what other characters said or remembered about her speaks volumes to the author’s talent. If anything, the contrast of the main character was heightened because of it and showed how noble and upstanding his actions were in the midst of crisis and significant life changes.

An expertly-written book full of juicy drama, I give The Descendants 4.5 stars out of 5.