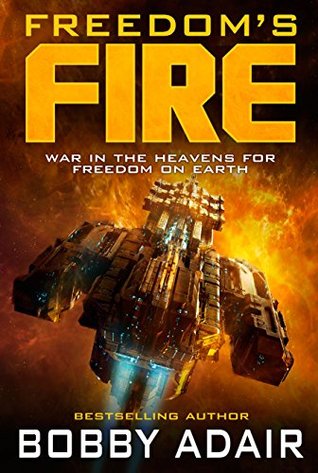 I find it somewhat refreshing to read a dystopian book where the dystopia has already happened. There are far too many that detail the onset of a dystopia, and a scant few that actually deal with the realities of the dystopia. While this does lead Freedom’s Fire to have a cynical and depressing tone, at least there is a growing hope as the story progresses. At the very least, this book was a quick read, helped along by its pacing and action-packed sequences. On a personal note, I also liked the fact that it was set in Colorado, as I could easily connect with the locations and lingo.

While Freedom’s Fire was an enjoyable read, it did have a few minor flaws. As I read, I mostly understood the vague goals of the main character and his crew, at least in simplistic terms. Get off Earth. Join the Resistance. It was the in-between waypoints between these broad goals that were never really clear. Furthermore, the start of the book was a little slow as the author took some time for worldbuilding. At least, this expositional section still moved the story along and wasn’t completely obvious as an exposition dump. Finally, as an author myself, I understand the need for “reader involvement.” Even though the final section of the book was somewhat amusing and a different way to ask the reader for help, it mostly came off as desperate.

The aforementioned flaws are practically negligible when it comes to the strengths of Freedom’s Fire. There were certainly elements of HALO, Ender’s Game, and Starship Troopers (1997) to this book that worked well together. Perhaps the most important strength of this book was the situational awareness used by the main character. From his ability to take out enemy starships to his ingenious use of the smaller size of asteroids, the action sequences benefitted from these unique tactics. Or, at least they seem to be unique when compared to the “shoot ‘em up” brute-force approach.

A well-written and almost “pulpy” military sci-fi book, I give Freedom’s Fire 4.5 stars out of 5.