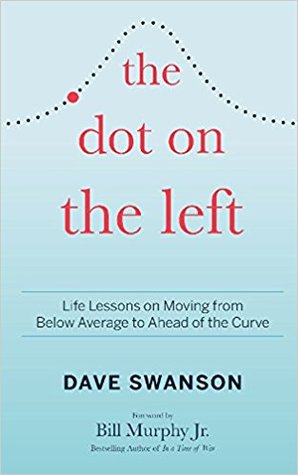 As someone who has usually found themselves naturally on the center of any variety of bell curves, I know that application of some hard work and dedication can move someone to the right side of said bell curves. It was with this in mind that I was curious what advice is contained in The Dot on the Left. Were the same tactics used for those who underperformed to get them to (and even past) the average of the curve? I was disappointed to find that this book is not so much a “self-help/advice” type book, but rather a memoir from someone who was on the left side of the curve.

Sure, there is still some of the advice that I would expect to find in a self-help book in The Dot on the Left, but it’s sometimes hidden within the memoir stories of the author. It’s still pretty basic stuff, and what I would expect given the topic. There’s no “miracle cure” or “fix it fast” advice in this book, but rather a confirmation that succeeding in life can take a lot of time and a lot of hard work. Learning curves are a huge part of this. I am a little disturbed by what appears to be early-onset alcoholism in some of the stories, but overall it was an entertaining read.

Of course, the fact that I had to pay shipping for this giveaway book (the author makes it clear that he was never good at math ;D) doesn’t affect my review as much as some of the little formatting mistakes in the book. Some repeated text, as well as right-aligned justification (instead of justify-aligned), pulled me out of the story momentarily. When it comes right down to it, I’m almost more interested in what happened after the short time span covered in the book, which seems a little too short to even be a memoir (which is how it is written).

A memoir with some nuggets of wisdom buried within, I give The Dot on the Left 3.5 stars out of 5.